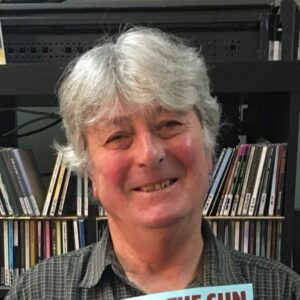 Born under a bad sign on the wrong side of the tracks in Sydney longer ago than he admits to. Haunted the second hand record shops in the sleazy end of town when he should have been at lectures. Has tried his hand at everything: libraries, seed collecting, market cooking, teaching and other boring pursuits. After a lifetime spent largely alienating himself from the rest of humanity, he's recently returned to his time honoured profession of waterfall attendant. In times of drought, when said gainful employment tends to dry up, he's taken on the onerous task of slogan writing for the Feral Liberal Party and is pleased to note that such catchy phrases as "shit happens", "climate change is crap", "the age of entitlement is over", "jobs and growth", "everyone's a winner under the Libs"and "love means never having to say you're sorry" have passed into the daily political lexicon. Since the Late Pleistocene, when he last had the TV connected, he's been a radio junkie and, quite frankly, can't get enough of them airwaves. Mainfm/WMA was the first station to ask him to present a show, and reluctantly he accepted the challenge. He's been presenting Get Your Groove Back aka The Lifters & Leaners Show since the beginning of 2012.